– General construction similar to VG standard knife gate.
– Bidirectional gate, with two seat gaskets.
– Longer body in two parts assembled by bolts.
– The gate is longer and its lower part rests out of the body, which requires a second system of gland packing.
– The gate contains a hole, which assures:
. in opened position, a complete passage of the fluid without retention zone.
. in closed position, the complete obtu ration.
– This gate is particularly adapted in paper mill, in the exit of pulp, for the recovery of the old paper where the product is mixed with numerous impurities (ex: staples).
– No retention zone: interesting in load or unloading of chemical device (dryer, reactor…).
– Valve tightness even in difficult conditions.
No accumulation of product in the bottom of gate evacuation gorge. 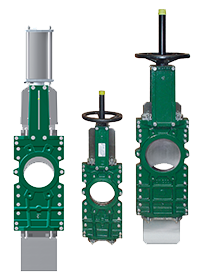 HANDLING POSSIBILITIES
All the solutions of actuators, detection and accessories are identical to the VG standard valves.

FACE TO FACE
According to standard TECOFI.